Most people like to go out for coffee with friends to catch up.
I, however, detest coffee and would much rather bond over some enchiladas and queso dip.

We just sat down, ordered our drinks, and before we take the first bite of chips and salsa, you ask me...

I laugh.
Because the answer to that question is so not wrapped neatly with a bow.

Followed by a sigh and slight smile.

On February 14, my life started to twirl around me in hurricane worthy speeds.
The night before, I launched my business.
The baby I had been carrying around for years...
The dream that I had worked tirelessly to bring into reality...
Was finally, finally live and launched to the world.

We had a wonderful, overwhelming outpour of support at my launch party.
Church family came to visit and Facebook Live allowed out of state family and friends to be a part of it as well.

So much awesome.
So much amazing.

But I was sick, sick, sick.
The week leading up to my launch, I swore I was dying (or pregnant...)

I actually took a pregnancy test a few days before my launch.
I just knew I was...
I had all the signs.
But it was negative, and as soon as I saw the results, the old familiar feelings of our previous infertility struggle resurfaced.
Sweet Husband was quick to combat those lies and spoke truth over me, as he so wonderfully does.

I chalked it up to stress leading up to my business launch and went about my day.

Day after the launch, I woke up feeling worse.
I figured a morning at the walk-in would be the most romantic Valentine's date ever, so we went.
When the doctor called me back and asked about my symptoms, something in me wanted to ask for a pregnancy test.
I don't know why, because I literally took one 2 days earlier and the results were negative.
Against my better judgment (knowing I was just asking for heartache) I told him I could be pregnant and would like to be tested.

The words that followed the knock on the door still ring in my ears...

Yes.
I told this sweet, old man doctor to shut up.

I couldn't believe it.
I had him check again, and again.

My mind swirled.
Brandon was waiting in the car.
How do I tell him?
It's Valentine's Day!
I need help.

So I texted my sis-in-law, who immediately called me screaming, and we tried to come up with a plan.

Long story short, I couldn't wait much longer than the ride home to tell him the news.
On my phone, I keep a running list of shirt ideas for my business.
He'd seen this list before, so it wasn't out of the norm for me to ask him to look it over. 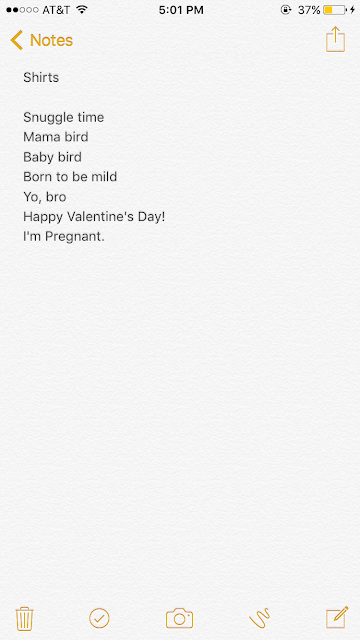 I watched as his lips read over each idea and landed on the last one.
His face seemed to have read "wait, what?" and he looked up at me with tears in his eyes.

Needless to say, we were shocked.
Still am, quite honestly.

New business.
Baby in my belly.
And I was (am) still so very sick.

I have not been able to shake my sickness though, in fact it's getting worse.
(Morning sickness being the least of my worries.)

Last week, I finally got into my general physicians office and we starting running tests to see what's going on.
Today I did some blood work and hope to get those results quickly so we can start on the path to recovery.

The doctor has thrown some scary words out there...
preeclampsia, thyroid issues, anemia...
But I know everything will be okay.

My only prayer for this week is to be seen by my OB.
That my test results will put enough urgency in things so I can ultimately go in and see my baby bean.
I just know that will calm this Mama's heart.

I'm well aware that that lunch conversation would have taken awhile and we've probably moved on to dessert.

I hope I got a strawberry milkshake...